The passages in Matthew from this past week's readings have brought to mind two paintings that I particularly admire... 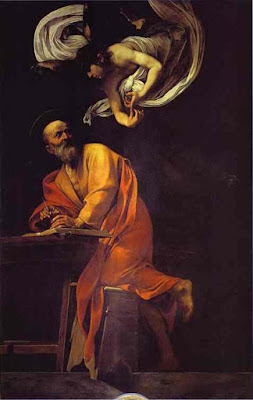 Ah, the rhythm of the fabrics, the amazing color of Matthew's garment, which glows like fiery embers about to set the world on fire -- and how fitting. I always imagine that the angel is breathlessly telling Matthew, "Oh,yes! I was there! With the heavenly host in the sky that night! There were thousands of us singing, "Glory to God in the highest!"

I look at that quill in Matthew's hand and wonder what it was like to pick up a writing instrument and be divinely inspired. Wow. Wow.

And this one really does something to me: 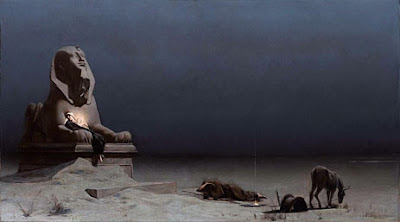 Rest on the Flight Into Egypt by Luc-Olivier Merson, 1879; oil on canvas; Boston Museum of Fine Arts

Countless artists have depicted the flight of Mary, Joseph and the Christ child into Egypt; you can peruse about a hundred examples here. But I've always had a special affection for this one. Somehow it captures the desolation -- the utter alone-ness -- that young Mary and Joseph faced in fleeing from a powerful, wicked king who was willing to kill all the babes in his kingdom just to ensure the death of their own sweet Child. How horrifying... and yet it really happened.

The image of Joseph sleeping on the cold ground just tears me up, always has. It reminds me to try to appreciate Joseph, to ponder all he gave up for the sake of a child not his own, but to whom he fully belonged... the only man who ever had to grapple with the conundrum of how to be the child of your own child. Beautiful. Confoundingly so.

And what a metaphor Merson created with the warm, living light of the Christ child lighting up that old, dark, cold, dead, mute and blind stone god of the Egyptians.
by Lynn Bruce

Thank you for sharing these imagination inspiring pictures! I'd never seen the Luc-Olivier Merson depiction of the Egypt Flight. Wow. I realized a more profound appreciation for Joseph this Advent season from a children's book. I could hardly read this one to Maggie without my voice breaking --
Father and Son : a Nativity Story by McCaughrean, Geraldine.

Thanks for this. I just adore the Rest on the Flight into Egypt - it's one of those paintings that stands on its own, but that also triggers expanded imagination, just wondering 'what was it like' -

As an art lover and a Christian, that is just an awe inspiring painting. :) I came by to thank you for your comment and for stopping in at my blog. :)

Email me a link to the larger version of that painting some time if you have one!