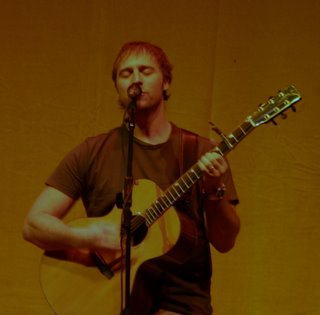 YES, the Bebo Norman concert last night was great! We got there early enough to get third row seats. 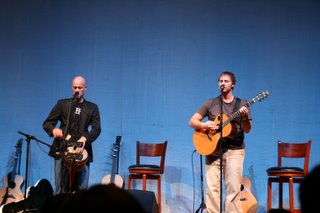 He shared the stage throughout the concert with his good friend Christopher Williams, who was amazing and has natural stage presence if I ever saw it... he did this truly astonishing cover of Dylan's "Serve Somebody" with nothing but that drum and his voice, which had everybody gaping. I believe he out-Dylan'd Dylan (but don't tell Evan). 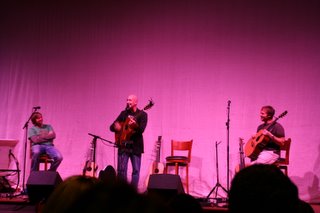 ...and with Jonah Werner (far left), who is hard to describe -- a sort of modern day folk troubadour who sings and talks at the same time. Enjoyable and funny, but probably not my fave. But he was a good balance for Bebo, who is rather quiet and serious, and Christopher, who is intense... and all about that rhythm thang.

Bebo played five songs -- but I could have gone home happy with my ticket stub after his second, Trees Stand Still, one of the loveliest songs ever penned. Which, I might add, he said he wrote in Texas, while watching trees flash by outside his tour bus window. Why is it that the best things always come out of TEXAS, I wonder?

Wish you all could have been there!
by Lynn Bruce

i would suggest an attitude of envy, but that would be uncooth. I shall instead leave my congratulations on your being a part of such a fine and surely memorable evening!

I think the key word there is that they come out of Texas.:P

wow...I can't believe you saw Bebo in concert...I SO wish I could see him one day! I'm sure that was a great experience! I've never heard Trees Stand Still, but I assume it's on one of his cd's? I'll have to do some searching...and maybe some purchasing! ;)

okay, just for the record, no one can out-Dylan Dylan. it isn't possible. I have heard many people cover Dylan and no one, no one can get near him. he is.....untouchable. closest I've ever heard was Derek Webb covering "the Times They Are A-Changing" in concert, which was incredible, but still not on the level of Dylan.