And a Bonny Christmas to Ye! 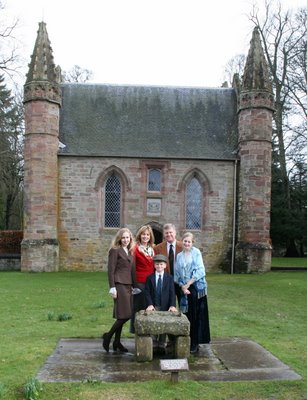 Merry Christmas to one and all!
This was to be our Christmas card picture this year... except that, due to health episodes with two of the grandparents this month, the card thing didn't happen this year. (Both of them are doing better now; your prayers are much appreciated.)

So we've decided to post our Christmas card here instead. Blogs are so handy, are they not?

This photo was taken in Scotland on the day of the big celebration of the 700th anniversary of the coronation of Robert the Bruce. We are standing on the Moot Hill which is right beside the Palace of Scone (yes, the one in Macbeth). Every king of Scotland since the 9th Century has been crowned on this hill, on the very spot where we were standing. We were there 700 years to the day after good old Uncle Bob was crowned there.

The stone now on the hill is a replica of the famous Coronation Stone of Scone, which was to remain beneath the throne of all Scottish kings... until the English stole it and began stashing it under their throne at coronations. Cheeky blighters. (Years of feuding over it have resolved in its rightful return. It is now back in Scotland at Edinburgh Castle.) Ancient legend says it was the stone Jacob used for his pillow, but of course nobody but Jacob could certify that claim. Cool legend, all the same. (Like the girl said in Lady in the Water, "I want to believe it!")

The small chapel in the background is, like most everything else over there, ancient as well. It's Presbyterian, and famous for several things I can't quite remember at the moment. Perhaps the Great Scot will remember and post a comment.

So there you have it -- the Beehive Christmas greeting for 2006. What a year!

We wish you all hearts full of glee, peaceful souls, the tangible presence of our Lord Jesus Christ, more love in your lives than you know what to do with, and a new year overflowing with God's finest blessings.
by Lynn Bruce

Very, very cool! Merry Christmas! I'm not sure if I ever told you, but Bryan's dad was really into studying his family's Scottish ancestry. They are from the Guthrie clan. His dad passed away when Clayton was 6 months old. He really wanted us to use Guthrie for his middle name, but I just couldn't do it (it is an awfully ugly name, isn't it?). Even though his dad is gone, I felt an overwhelming need to use Guthrie for a boy's middle name last time, but instead we have Lily Rose (instead of Graham Guthrie).

Merry Christmas from all of us! We love you very much.

MERRY CHRISTMAS!
see y'all at the meeting this weekend!

A very merry Christmas to all at the Beehive - wishing you Christmas joy, and a taste of heaven on earth.

I can't wait till I get to go to Scotland this summer. Mother got me two beautiful books full of pictures. A very Merry Christmas to the beehive as well!

Owl of the Desert said...