Confessions of a farm girl

I grew up on a wheat and cattle farm in Texas. My parents still live there, and my family retreats to it as often as we can (my kids would go every weekend if they could). It's a wild place in the heart of old Indian territory -- we've found scads of flint spearheads there. 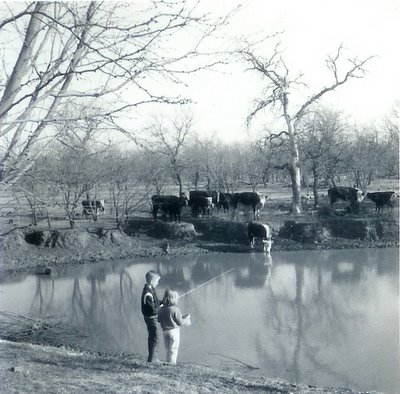 Fishing with my brother David. Daddy tossed out our TV early on, so this is how we spent our afternoons. Sometimes I fished, other times I read aloud while he fished. We would talk about stuff for hours. He was a fine boy, but he's a truly great man, with towering intellect and spiritual depth. That greatness of mind took root while meditating life and God and ideas on the banks of ponds like this. I wonder what sort of man he'd be if he'd grown up in front of a TV instead.

The farm is also a natural habitat for tarantulas, black widows, brown recluses, scorpions, rattlesnakes, water moccasins, bobcats, coyotes, the occasional wild boar, snapping turtles that could take your toe off, roving packs of aggressive emus, angry bulls in the pastures, and wild stray dogs, not to mention the minor stuff like bees, hornets, wasps and mosquitos, or even the flora dangers like cactus, mesquite thorns, devil's horns, bull-nettle, poison oak and huge grass burrs, all of which are everywhere. WHEW.

Out in the country, there is no way to control your encounters with such dangers -- even staying 'safely indoors' won't do, because critters find their way in. So my parents recognized that their only reasonable option was to teach us how to do what we could -- how to best live where God had put us. Then they simply let us roam the countryside with total freedom (and prayed lots, I'm sure).

My parents taught us that God has dominion not only over us but also over all of His creation -- every scorpion, every spider, every single snake. I have called upon the power of His dominion many times while staring down a rattlesnake. 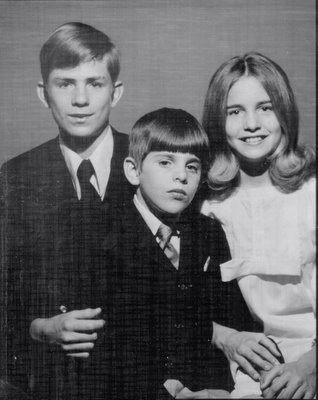 Here's the plot twist: David and I have a younger brother, Danny, who is autistic and mute. When he was a child, he loved to play with pea gravel -- sifting it through his fingers, tossing it into the air, running his hands over it -- so my father built him a fenced gravel pit outside, close to the house. He also loved anything string-like -- twine, ropes, thread -- so it stood to reason that he might not have the desired reaction should a snake slither into his gravel pit. He was also completely unafraid of creepy-crawlies.

One day we found him sifting his gravel to the amusement of a huge tarantula about four feet away.


After that, my father instructed David and me that if we ever saw anything on the farm that could harm Danny, we were to try to kill it if we could do so safely. We were probably between 8 and 10 at the time. We were fiercely protective of our little brother, and we took Daddy very, very seriously. 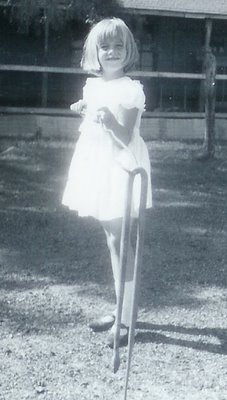 I'll cut to the chase now, even though this could become a much longer story if I were to tell you all the adventures from those years. By the time I graduated from high school, I had single-handedly killed nine rattlers, all of which I came upon alone and unarmed (I've still never shot a gun). David killed his share as well.

At times they could not be avoided, even indoors -- one winter a large rattler hibernated in our pantry, coiled around the crank shaft down inside the ice cream maker. Its discovery was momentous, to be sure. And then there was the time Mother opened the silverware drawer to find... but you probably don't need details on that one, seeing as how you may be called upon to set your table within a few hours. 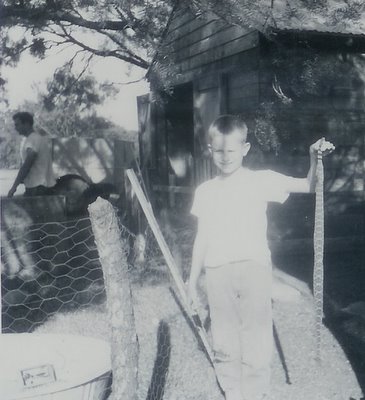 We learned that boxes were likely to have brown recluses in them -- to count on it and be ready. That a board or stone was likely to have a black widow under it. To always check under a swing or yard chair before sitting down. That if you ever see a scorpion, to start looking for its mate because they travel in pairs. To be super-aware around sandstone rocks and cliffs, because rattlers blend in completely. That tarantulas can jump VERY far, so you only approach one from behind and watch him closely lest he turn quickly. That baby rattlers have venom, but they don't have noisy rattlers yet to warn you, so they are doubly dangerous. That boots and jeans are a necessity and not a fashion statement. To never stare an agitated animal in the eye. Things like that.

These things are all second nature to me now, things I do without a spirit of fear. It just seems an ordinary part of being wise in your surroundings.

I now live smack in the middle of a major metropolitan area, in a residential neighborhood practically devoid of wildlife, where pest control companies have eliminated most anything with more than four legs. I am much more afraid outside here than I ever was on the farm. Why? Because the dangers of human nature are far less predictable than the dangers of wild nature. When we visit the farm now, I turn my children loose after giving them the drill on how to handle the indigenous dangers. Then I relax with a glass of tea. But here in the city, I am always vaguely unsettled when they are outside. I become hypervigilant if they get near the end of our block.

I will never be as wary of a rattlesnake as I am of a stray car creeping through my neighborhood, or a stranger roaming the alley. A doctor can treat the wounds of the wild, but not this other kind.

Here's the bottom of it: I am a calm, confident adult with few fears, and I attribute much of that to learning the boundaries of nature and finding my place there as a child. I find that my adult friends who are irrationally afraid of things -- the dark, the wind, lightning storms, creepy-crawlies -- are the ones who were raised mostly indoors, under mother's wing. I wouldn't trade places with them for anything. I have sadly seen them clutched in fear over things that fluster me not at all. In a nighttime storm, I can sip tea and enjoy the wild song of the howling wind, while they tremble at the window and imagine the end of the world as they know it.

But it's God's world, and He knows we're in it.

What a great gift it is to live at peace with nature. But you don't learn how by playing it safe. Your choice is to get out there and learn to respect the wild and master your place in it, or hang back and shudder in fear of it. There's not much middle ground.

If my son gets bitten by a snake or a spider, there's a hospital nearby -- he'll be okay. But if he grows up to be a soft, timid man, one possessed of a need for protection rather than a will to protect -- well, my damage is done at that point and there's nothing I can do to repent of it.

We are supposed to protect our young. But we are also to help them learn to be competent, at ease, and able to rejoice in the world God made for them to live in, with its beauties and its dangers. It's a gift to be shown how to live wisely, confidently and peacefully in the natural world God set us in.

Lots and lots of really good advice here. I'm going to read this over a few times and tell my kids.

Okay, I'm impressed (huge grin)~
I do understand about the brown recluse. Where we live, you can still count on there being one in each box! All the kids know to stay alert and aware.

While camping in Tennessee this summer, 12 yo J and I saw two or three copperheads...and the youth minister had to kill one that came into our camp. That was his first kill, and he is 25!

I've only had one encounter with a rattle-snake...out in west TX. Another camping/backpacking trip with hubby's school. Mistake no. 1, I was alone!
Great post...
Javamom

Sometimes I wonder what I would be like if I had been raised on a farm. Probably not so medium maintenance, hey?

I've always desperately wanted to live on a farm. I want to grow up on a farm when I grow up. It doesn't work. Maybe I can raise my own children on one.
We did grow up tasting it though, a few feed cows here and there and chickens sometimes, and always a garden. And then going to Grandpa's was heaven on earth.

OH MAN! The Pyles farm....makes me want to be in Texas more than my craving for some authentic Justin boots. Does Elder Sonny still have the cows and everything? Could I come and be a cowboy? Huh? HUH! COULD I!!!

Also, is that THE SNAKE that Bro. David took to school? Because thats like a piece of PB history since your father has started telling the story.
Needs to be in the PB Museum Of History along with the First Lightbulb ever used in a PB church which caused the Great LightBulb Split of 1842...

Aunt Lynn...you HAVE to tell about Danny and the boot story that we would always get Brother David to tell us at Jackson Singing School when we were younger. I know you remember the one I am speaking of! Always a great story...even when we'd heard it a hundred times! Although, it might be one you have to see instead of just tell...

Adam, different snake. MUCH bigger. That was during his senior year in high school. Horrific boy, doing that to his poor mother.

It IS a great story, but it belongs entirely to my daddy. He HAS to be the one to tell it, although I bet David could put a good spin on it, too.

Lacey, you've seen David and me tell that one so many times! But I agree, I think you have to see it to believe it. Maybe I can get him to tell it with me at the January meeting in Jackson. For old times' sake.

Do you think we can get all the little kids to kick off their shoes and make a shoe campfire for it? :-)

(I know for sure we can get all of you older kids to do it -- nostalgia is powerful!)

Owl of the Desert said...

I see strong resemblance between the Shieldmaiden and the Queen...

As has been said, great post! I often wish as well that I had grown up with more "country." I love every chance I get to visit it.

Wow! Sounds like you had a lot of great experiences! I had a great-grandmother who used to kill snakes with here butcher knife if they came anywhere near her. I never got to meet her, unfortunately, but I hear that she was quite a woman.

Yeah! I shoe campfire! It's been WAY too long since we got to take off one shoe for being good in the morning, and then if we were good for the rest of the day, we could take off the other! AwWw...those were the days when the little "flowers got watered" with lemonade! Where have those days gone?!