Stirling Castle was our favorite castle of the whole trip. Set high on volcanic rock in the heart of the kingdom, it dates back possibly before the 12th century. As the official tour book states, it has been famously called the "huge brooch clasping Highlands and Lowlands together... symbolizing the spirit of Scotland for Scots and non-Scots alike... Without this castle, there would have been no need for William Wallace to fight the Battle of Stirling Bridge in 1297, nor for Robert the Bruce to fight at Bannockburn in 1314."

This stunning statue of King Robert the Bruce stands on the grounds outside the moat. 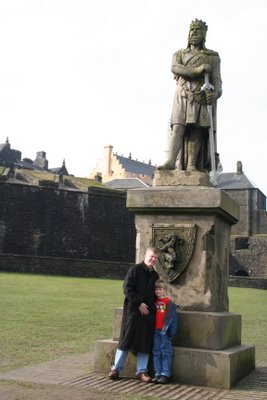 The castle overlooks the Stirling River bridge in the valley below -- a bridge that Wallace employed as the decisive factor in one of the most strategic battles of Scottish history. It really was as misty as it appears in this picture. Notice the sheep in the distance. 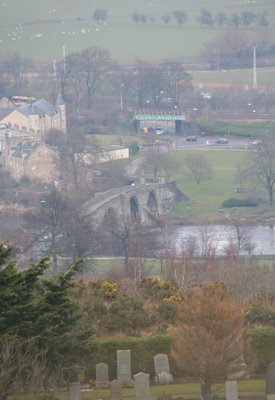 Stirling Castle is massive and surprisingly ornate. It would be impossible to get a good overall photo of the entire castle without a helicopter, so understand that these are just pictures of portions of the castle. Let me say it again: it is MASSIVE.

Trust me, everything in these pictures is at least twice as big and tall and overwhelming as it looks! 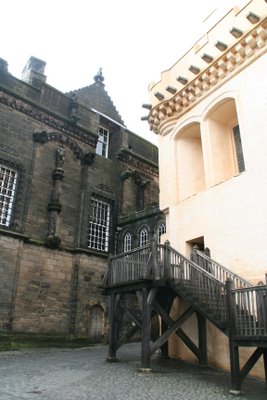 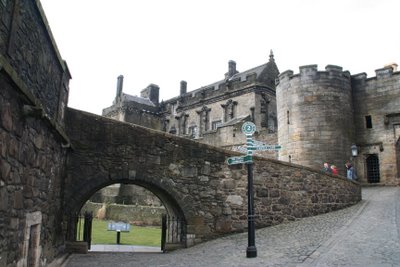 The Palace of King James V 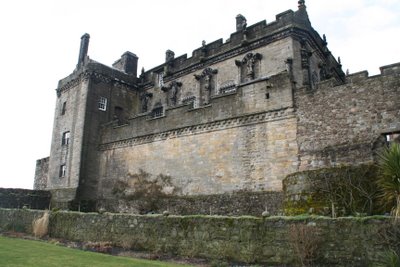 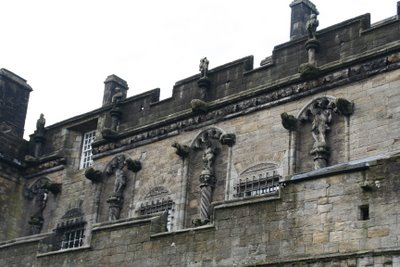 View of the outside of a dungeon... 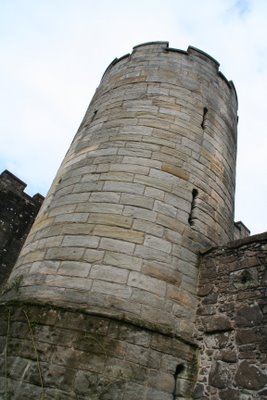 ...and the view from the inside: 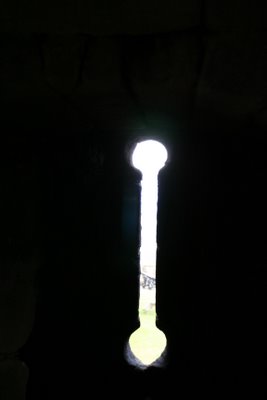 Claire said Tolkein used elements of this castle as inspiration for settings in Lord of the Rings, particularly The Great Hall in the next three pictures, which was built in 1503 by James IV to serve as the center of public and ceremonial life for the royal court. This room is cavernous... enormous. 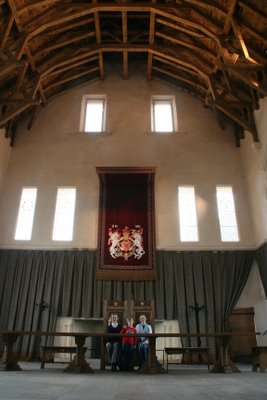 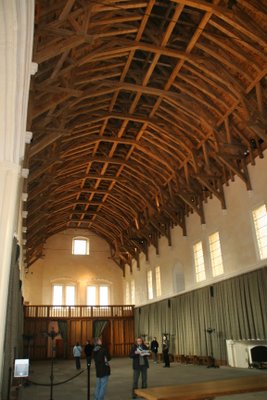 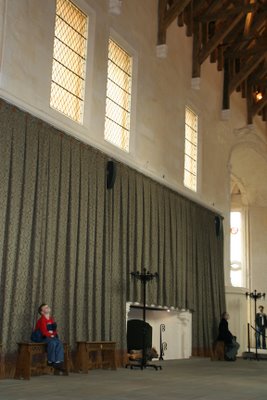 It was so charming, so satisfying, to watch my children at Stirling Castle. They were lost to the present, wandering along stone walls deep in thought and well-fed imaginations. I would say all those years of studying British/Scottish history and reading all those stacks of great books truly paid off that one day -- the girls knew where they were. And they knew the significance of it all so much more immediately and fully than Dan or I did, which pleased me greatly.

Claire muses on the wall of the Outer Defenses, where there seems to be no end to the horizon. The tower in the distance is The Church of The Holy Rude where John Knox preached... 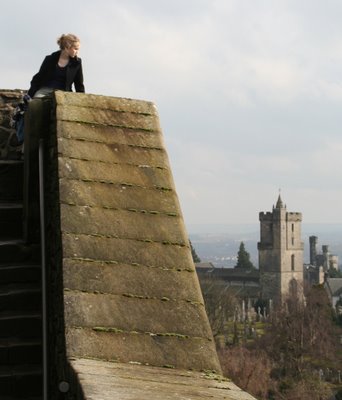 The Shieldmaiden in a "sentry box" on the lookout for vile Englishmen... see her in the small window? 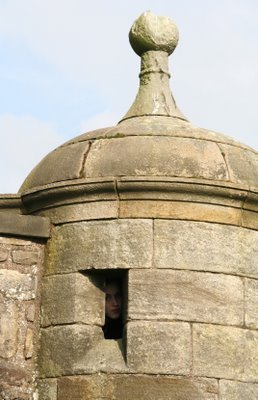 Caitlin was in awe standing under this magnificent ancient tree, looking out across the huge grassy courtyard. When I asked her what she was thinking, she said, "Oh Mamadah! Do you get it? King James IV BOWLED on this lawn!" 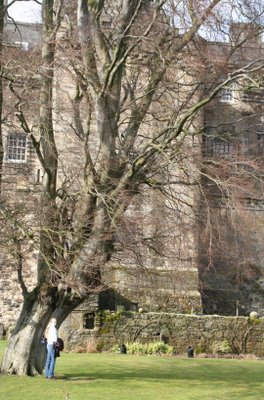 Funny how life turns around on you -- all these years I've spent teaching them have made them able to teach me now. I love that. You truly do get back everything you give.

We went inside the chapel where one of the six King Jameses was baptized (don't recall which), and the girls and I couldn't resist going to a corner and singing Bruce's Address, an old hymn with words adapted from Burns' poem "Scots Wha Hae" and sung to the same tune as the Scottish folk song with Burns' words. The British are so different from us, so reserved -- the small group of tourists in the chapel scarcely looked in our direction, which would never happen in America where people just seem wired to gawk and comment. But we did hear one woman whisper to her husband, "They must be from the States" -- which we suspected was either a comment about our shocking lack of inhibition or else perhaps directed at the fact that we sang the "wrong" words to what is for them a familiar national folk tune.

These castles are overwhelming to the senses. It boggles to imagine men planning and constructing these massive structures so many centuries ago, and without machinery or electricity. The stones are immense; there are untold tons of concrete, and all of it atop these impossible cliffs. Everywhere you look there are gargoyles, stained glass, carved wood elements, intricate paving patterns underfoot, patterns in the stonework.

Again, these pictures simply do not convey size... mass... texture... 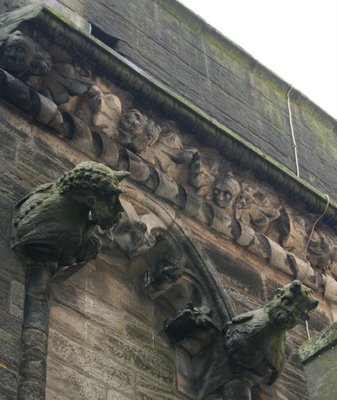 ...for instance, this mossy old gal is much larger than life-size... 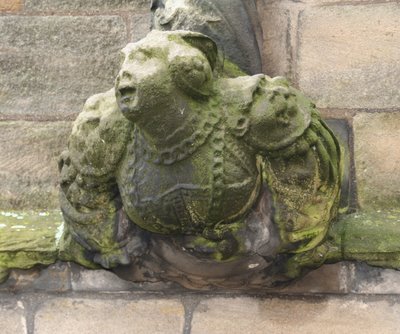 It's astonishing that they would have bothered with all that detail and beauty in what was essentially a military fortress. But you begin to absorb after a day or two in this atmosphere that having a king around changes everything.


A couple of shots taken from the castle walls... this shot shows the Royal Gardens: 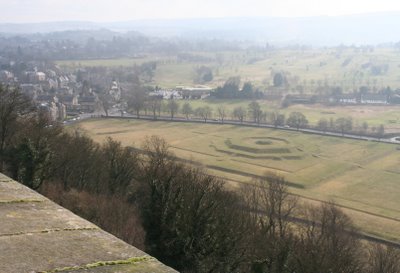 This is one of my favorite shots... I really like the way it almost has a geological layering effect... 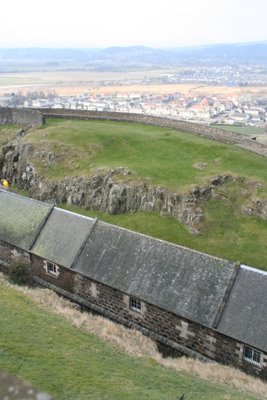 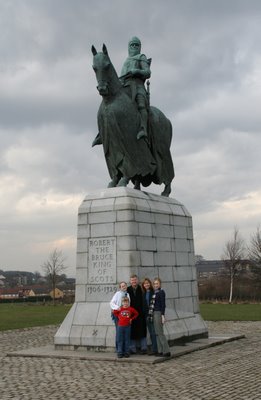 Our senses all but exhausted, we left Stirling and drove a short distance to Bannockburn, a small town surrounded by rolling farmlands. We got there right before dusk. The Bannockburn Battlefield memorial area is still mostly open and undeveloped, though you can see the burgh to one side. In the center of the battlefield is the memorial, a large open ring with flags billowing above it in the sunset, and outside the ring is the famous equestrian statue of Robert the Bruce. Oh, it's beautiful! What a thrill to finally see Dan standing beneath it like he's always dreamed of doing!

The girls and I stood near the spot where Robert declared Scotland's victory over England, and sang a Sacred Harp song. What a moment that was -- the open ring of the memorial was designed for accoustics, so that when tourists (like me!) read aloud the portion of Bruce's stirring address to his troops which is engraved on the memorial, it just THUNDERS. What a thrill! So with those acoustics, it was doubly wonderful to sing there.

Oh, since I know you'll ask... here is that quote from the address, which you can see most of in the picture below:

"WE FIGHT NOT FOR GLORY, NOR FOR WEALTH, NOR HONOUR, BUT ONLY AND ALONE WE FIGHT FOR FREEDOM WHICH NO GOOD MAN SURRENDERS BUT WITH HIS LIFE." 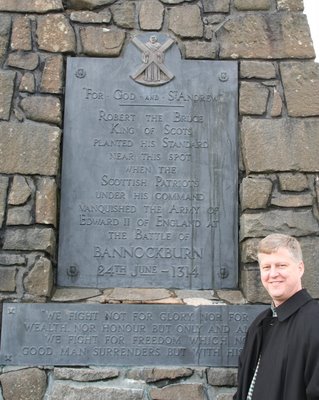 Well, it looks like Saturday is going to take three blog posts, because I can't even begin to cram our magnificent evening at Dunfermline Abbey with the clan into this post!

I confess my knowledge of Scottish history is very limited, but your posts have stirred my interest. I look forward to the next installment.

Man....I want a castle.
If I had one I think I would name it Castle Greyskull. But I think that one is already taken.

Yeah and verily, did you not have the most fantastic time? I love the photos, and am so happy that you got to go a year earlier than planned! Are you hooked, now? Isn't it mah---velous?!

Now you must read Ruskin's works on Architecture! He is quite funny when he discusses the embellishments of the old world architecture. I took my copy on our latest trip to Europe, to read on the plane.

How do you comment on that? My favorite photo is of Claire on the battlement looking like a princess awaiting a glimpse of the soldiers from centuries past to ride over the horizon as they return home from war. *sweet sigh*
I also loved Caitlin's tree. To walk in the footsteps of the ancient is truly an awe inspiring thing.
Thanks for sharing it all with us... even though you have no Idea who in God's green earth we are!

Found your blog through Semi-Colon. We have been doing all things Scottish big time this year. The kids are dying to go and as their grandfather grew up in Stirling and went to college in nearby Edinburgh. They will be so excited to hear/read about your travels there! Keep it coming! Meanwhile we'll settle for Scottish Festivals here in the states.

I want to keep reading these posts but I am feeling so very, very jealous I can hardly continue :)

The Great Hall is quite cavernous. And yet the are rooms more cavernous. Google "Doges Palace" and try to find a picture of the Great Hall there (Venice, Italy). Like many mathematically inclined folks, when I stepped inside I started moving to the walls and away from the center of the room because I thought it might collapse. HUGE room, no central support pylons or anything. Biggest in the world like that. The secret? It's built like an upside-down ship's hull and the ceiling is hung from there.

Looks better now then when I was there in 1991. It was in the midst of massive restoration and there wasn't much to see. Still the grounds were impressive and the entire tour was fascinating. Nice to see what it looks like -- helps me to remember what a great trip it was and how much I learned of Scottish history while there.