Now then, let's cut to the chase about our hotel room. New hotel, spotlessly clean. That's the good part. But... no washcloths, no bathmat, no telephone, and look Ma! -- no topsheet on the beds! One t-tiny little bar of soap. (However, there were plenty of PG Tips tea bags and a very nice hot water pot, plus ample cream and sugar. We all have our priorities!) So Great Scot went to the front desk to inquire after the missing items... and the bubblehead desk girl chirped, "Dooon 'ave 'em, sorrrry!" And then she went on to explain -- with mangled consonants sung in lilting tones -- that it was all for our own good somehow or another. Gotcha. Right.

And thus it was without a topsheet that Great Scot finally got to sleep beneath the skies of Scotland. But no matter - it was about time. We were all so happy for him! I told him I suspected his father was somewhere dancing for joy with the angels.

Next morning, we passed around the sliver of soap and valiantly resisted the evil urge to cut up a spare towel into washcloths. Somehow we managed to get spiffy enough to venture out and face the Peugeot deathtrap again. Great Scot began his chant: "Stay on the left, stay on the left." He handed me a map as though he expected me to navigate. For real. I scoffed. Ever seen a Scottish map? Well, I have. HA. (But I did try.)

We only had, oh, maybe three near-death experiences on the short jaunt into Dunfermline (remember, that's doon-FERRRRRM-lin) for breakfast, and Great Scot was feeling pretty smug about that. I was plagued with these sort of semi-subconscious gaspy panic moments over the fact that I was sitting on the driver's side (American) but doing nothing, whilst the car was nonetheless moving in traffic. My brain kept yelling at me YOU SHOULD BE DRIVING AND YOU'RE NOT!!! Weird feeling, I tell you. Hard to describe.

We found a "car park" -- a parking garage -- and crammed the deathtrap into an impossibly tiny parking space. Then we just wandered with all the other Saturday morning pedestrians down the cobbly streets of the village. 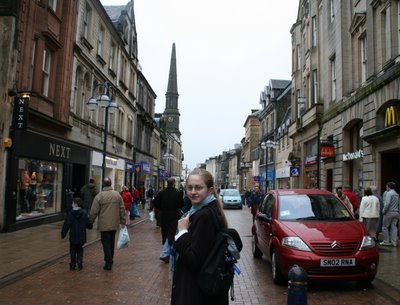 The old buildings and churches and shops are nestled up close to the rolling streets, and fascinating faces wander around shopping and visiting. We just strolled and gaped and eavesdropped. We could have listened to the Scots converse for weeks on end. So many variations in that accent!


We wandered upon a little breakfast place down a side street. We got in the "queue" to order and tried to figure out fast how the words on the menu board would translate onto a plate. The rosy-cheeked counter lady just smiled patiently and blurrrrted cheerrrry verrrrbage at us that was meant to be informative, if we could only understand... ummm, English. We finally just ordered whatever we were reading at the moment. Imagine our surprise upon discovering that a typical Scottish breakfast includes pork-n-beans! That slab of hammy looking stuff in the center is what the British call bacon. It was good, but it wasn't... bacon. 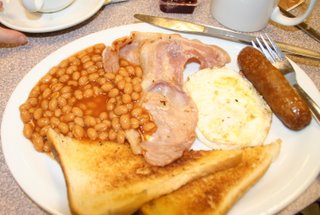 Then we splurched the deathtrap out of the carpark and braved our way into the countryside to find Stirling and Bannockburn. And that's when we began to really see it.

WOW. (I'll say this again, I'm sure.) Scotland Is Beautiful. 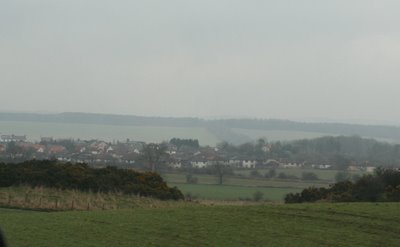 Here's a passage from my journal that day:

We could spend weeks exploring the Scottish countryside and the little villages. We sort of got a little lost today, which was fun, and wound up on a bona fide scenic route that led through tiny little villages along the river Forth. The roads obviously evolved from ancient horse paths because they are so narrow and winding, and many of the buildings are so close to the street that you feel you could almost touch them out the car window.

(To give you a feel for it, look at this picture I took from inside the car. You can see the registration sticker on the window.) 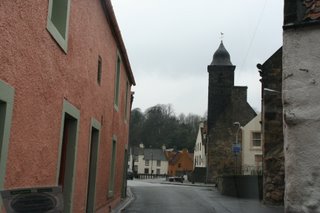 We truly feel like we have stepped right into the pages of some old book. Everything is so old, so stoney, so heavy. There are no billboards, no lights on the roads -- the sight of neon would be a shock here.

The trees are gnarly and twisting and covered in bright emerald moss; they look tricksy and sneaky, like they just might move when you look away. They are not leafed out so I don't know what sorts of trees they are, but their bare bones are unfamiliar to me. The rivers have a silver cast, and a Brigadoon-ish mist floats in the air.

The smallest cottages in the smallest villages are tidy and have well-tended herbs, shrubs and flowers. The Scots keep up their homes regardless of socio-economic strata, it appears. (Even the two trailer parks we saw in Scotland -- called "Caravan Parks" -- were neat as pins and, oddly enough to American eyes, they were right on the coast.) 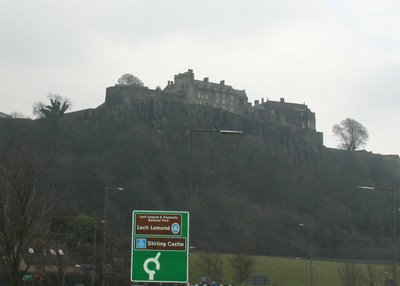 Stirling Castle! We all gasped when it first came into view on the horizon, and it was still many miles away. (This photo was taken about a mile away!) It sprawls along the span of the highest point in the region, a sheer rock cliff that appears impossible for any living being to climb. And yet William Wallace and his men did so when they stormed it over 700 years ago. 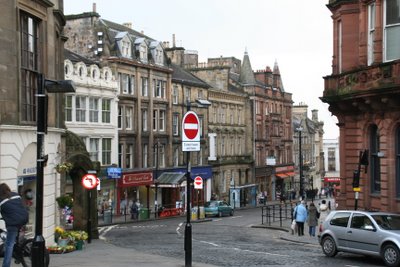 Stirling is charming, astonishing, beautiful... we ascended up winding stone streets past one magnificent structure after another, past dozens of statues and World War I memorials, until we made our way up to the castle mount. 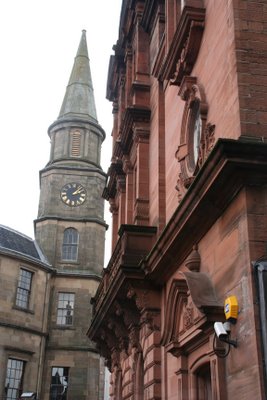 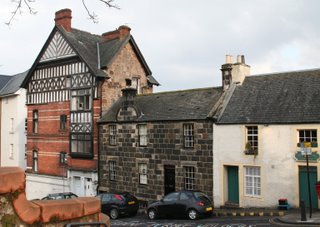 I couldn't stop snapping pictures -- I could have used up a whole gig on shots of stonework details and architectural elements alone!


Near the castle we found the path to The Church of The Holy Rude (which gave us a big chuckle) where John Knox preached. The adjacent cemetery was something right out of a Dickens novel -- mossy and rolling and full of towering ancient tombstones and rocky cliffs. Fascinating.

We had salmon "shammiches" and such at The Portcullis, a luscious old pub in a former grammar school for elite young men. A plaque on the wall helpfully noted that although the headmaster was a noted scholar of the 1700's, Robert Burns thought him a pedant. Ouch. It was here that we first encounted the British custom of serving potatoes with potatoes -- our lunches came a small baked potato AND with chips (somewhat like french fries but thicker and less salty). We learned quickly that chips are served with everything.

From there we trekked up to the castle. WOW, what a castle! It was our favorite castle of the whole trip. In fact, we have so many wonderful pictures of that, and of the remainder of Saturday, that I think it best to divide Saturday into three posts lest Blogspot rebel over too many photos at once.

So, I'm off to write about the next adventures of Saturday... Stirling Castle & Bannockburn!
by Lynn Bruce

that third picture is breathtaking...

It was here that we first encounted the British custom of serving potatoes with potatoes -- our lunches came a small baked potato AND with chips (somewhat like french fries but thicker and less salty).

And it was here that I first realized Hoosiers must have very British roots...

Ludwig, would you believe I snapped that picture through the window of a moving car (the deathtrap)?

No billboards?? Poland is very different. Don't stand still too long, or someone is liable to paste an ad on you.

those are great! i so want to go to scotland!