Why do we have Thanksgiving Day?

...Or, A different story of Abraham and Sarah

Did you know that the lady who wrote "Mary Had a Little Lamb" is also largely responsible for our national Thanksgiving tradition? 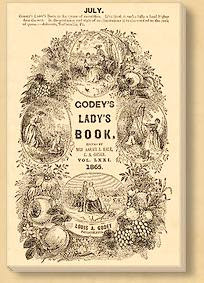 Sarah Josepha Hale (1788-1879) was a woman of letters in a day when few women were formally educated. For almost a half century she was literary editor of Godey's Lady's Book, the preeminent lady's journal of the time. She wrote most of the journal's articles, as well as poetry and published works of fiction. She was a household name for decades -- you could rightly say she was one of America's first female celebrities. Despite her obscurity today, her influence over American culture remains immeasurable.

Hale was indignant upon moving to Philadelphia to find that Thanksgiving was not observed there as it was in her native New England. George Washington had issued a proclamation for national thanksgiving during his first year in office in 1789 (shortly after Hale was born) and again in subsequent years. The next President, John Adams, ever the brainy contrarian, had a different notion. Rather than a day of feasting, Adams proclaimed a national "Day of Fasting and Humility." Somehow this never quite caught on as a way to spend a holiday.

Next came Jefferson, who was fierce in his belief that American Presidents should avoid the very appearance of posing as heads of the church (a la the English king), and, though he had proclaimed days of thanksgiving as Governor of Virginia, he purposefully never did so as President. (The FBI somewhat recently restored a fascinating letter from Jefferson to Baptists of his day defending his refusal; the Library of Congress article describes how the famous Baptist Elder John Leland, champion of religious liberty and Jefferson's friend, came to his aid.)

President James Madison briefly revived the proclamation tradition, and then, for almost a half century... nothing. The ensuing Presidents simply dropped the, er, turkey.

For Sarah Josepha Hale this would never do. Capitalizing on her immense influence, she published an editorial every November calling for a set day of Thanksgiving for the entire nation. Over many years, she persistently wrote letters petitioning Presidents Fillmore, Pierce, Buchanan and Lincoln, pleading for a revival of the presidential proclamations of Washington and Madison.
The agony of the Civil War galvanized her zeal, for she saw a day of national thanksgiving as a catalyst for unification and healing. In 1863, she wrote her final appeal to President Lincoln:

"Would it not be a great advantage, socially, nationally, religiously, to have the day of our American Thanksgiving positively settled? Putting aside the sectional feelings and local incidents that might be urged by any single State or isolated Territory that desired to choose its own time, would it not be more noble, more truly American, to become national in unity when we offer to God our tribute of joy and gratitude for the blessings of the year?"

She enclosed copies of her previous letters to his presidential predecessors. Public sentiment for her campaign grew, and historians record that the Battle of Gettysburg was the great event that finally swung the balance in favor of her cause. Following Gettysburg, Lincoln wrote a plea "that we invoke the influence of the Holy Spirit to subdue the anger that produced the strife."

Hale wrote in an 1863 issue of Lady's Book that "President Lincoln recognized the truth of these ideas (the unifying influence of a National day of thanks) as soon as they were presented to him." He replied to her appeal quickly this time, and honored her suggestion that the best time would be the last Thursday in November since, as she wrote, "the agricultural labors of the year are generally completed."

Hale, ever enthused for improving her country, then went on to spearhead the movement to raise funds and complete the Bunker Hill Monument, and to make a national monument of Mount Vernon. She was also instrumental in the founding of Vassar, the nation's first college for women, for which she helped devise curriculum.

And the fruit of her persistence in establishing an American tradition of Presidential Thanksgiving Proclamations continues to this day.

On Thanksgiving Day this year, let's be thankful for all the people before us who, like Sarah Josepha Hale, had vision and the wherewithal and persistence to make good things happen for their country and their culture. And let's pray for God to raise up more of them. We need them.
by Lynn Bruce

I knew a little about the history of Thanksgiving but nothing about such an exceptional woman of foresight, who tirelessly worked for this holiday for so many years.

Thanksgiving is my favorite holiday!