Why I Keep Going Back To Alabama 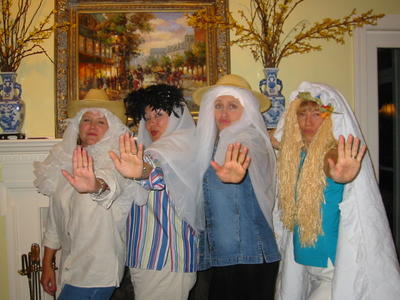 Such beauty is a rare sight to behold!

Ah, yes, I remember this moment well. Some of the family thought you were all a bit strange. Of course, those of us who know you realize it is nothing out of the ordinary.

That was a very memorable birthday!

That was actually the night I was given the name Queen Shenaynay... by your darling mother Joyjinequa Pandemonia...

Nice blogger photo Queen. I would have chose a more realistic photo though.

To the contrary, Darkside... it doesn't get much more real than that. Up to my ears in projects, barefoot, glasses falling off my nose, no makeup, hair messed up, and trying on a fancy colonial gown I was making for a trip with the girls -- over an old pair of ratty overalls.

It was unanimously voted by the Beehive constituents as "the pic that best sums up Mamadah..."

Well well, I never would have guessed it. (Unless it was mutiple choice and the other pics where not you.