It's been said that the mind is like a rubber band -- once it's been stretched, it can never go back to its original dimensions. Day 3 in Scotland was a rubber band sort of day. Even now, two short months later, it still seems unreal, like something too big to squeeze into my life story, surely... no, no really, that must have happened to someone else.

That sort of day.

Day 3 was Sunday, March 26, THE big day of the coronation festivities. We had been apprised of the basic itinerary for the day, but again, we really had no idea what to expect. The only thing we knew for sure was that Lord Elgin was having The Bus come around for us at early-thirty, and would keep us hopping - to three separate events! - until very late that night.

The dapper bus driver arrived, greeted us with great cheer in something akin to English, and then glided us through the hour-long journey northward to Perth. There we were to start the day with a special service at St. John's Kirk, which we were told was an ancient and important church in Scottish history, of the "Church of Scotland in the Reformed Tradition" variety.

Now, my fingers could atrophy on this keyboard waiting in vain for me to conjure up fitting words to describe everything that floated by outside the windows of the bus en route from Dunfermline to Perth. So please allow me to merely repeat myself: SCOTLAND IS BEAUTIFUL.

I kept waiting to round a corner that would reveal some ratty little enclave or a guilty pile of rubbish, but it never happened -- the land grew more enchanting as we headed north. All those familiar illustrations of A.A. Milne and Beatrix Potter and James Herriott -- why, there they were! And their peculiar watercolored words spoke themselves in my head: hedgerow, spinney, stile, copses, rockery, gorsebush... all those things... just rolling by like it was the most natural thing in the world.

There were too many scenes begging for my notice. Overwhelmed, I simply turned off my camera and settled back to see what tricks the scenery would do next. How could anyone not live happily ever after in a place like that? I wanted all my loved ones to stroll into the scenery, the way Gene Kelley and Van Johnson just felicitously happened upon Brigadoon. Aye, can't you see us? We're all rrrroamin' through the heather on that hill over there, singing some old hymn -- the kind that still remember the piper's drone. Aye!

A wide river sidled up alongside the road, running so swiftly it appeared to be on fast-forward -- the legendary River Tay, known for its silver hue and its wild salmon. And then, just-like-that, the city of Perth blinked into view. The spire of the kirk seemed to rise from the river banks at the heart of the burgh.

St. John's Kirk has played a pivotal role in Scottish history. The first mention of its existence is dated 1128. It was here in 1599 that John Knox ignited the Scottish Reformation by preaching a fiery sermon against idolatry. When he finished, a priest approached to celebrate mass, and was hit by a stone thrown from the congregation. A riot erupted in which the church was stripped of all Catholic fixtures (though the building itself was not damaged). The riot raged across Perth for several days, during which the three area monasteries were also bared to the walls... and thus the Scottish Reformation began in earnest.


Here, arriving early, we are greeted at the door by Charles Bruce, the very amiable second son of Lord Elgin. The church is larger than it appears in this photo. 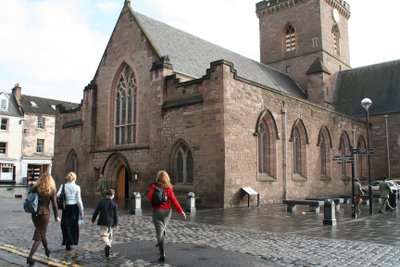 This, my friends, is a 900 year old sanctuary. Let's put it this way: if you've read somebody's name in a Scottish history book, you can pretty safely assume they've been here. 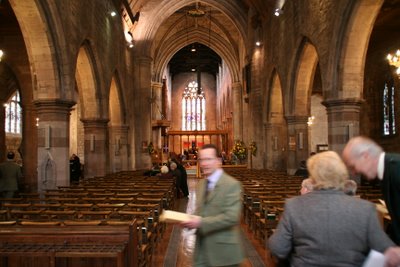 We were among the first to arrive, and were ushered to the front transept which was reserved for the Bruce entourage.

Soon BBC camera crews began to arrive, as well as Lord Elgin's own videographers who made a commemorative DVD of the day's events. Photographers set up camp in every spare corner. We began to suspect we were in for Quite A Morning. We were right.

Settling into our reserved seats while the Scottish National Fiddle Orchestra plays right next to us -- lovely! 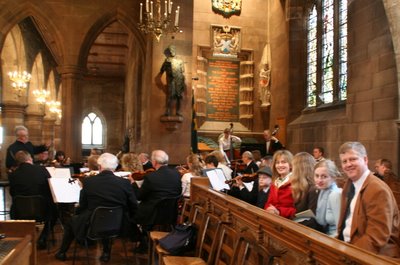 The service was quite magnificent! It began with a grand processional that included pipers and two choirs. Then a whole slew of dignitaries filed in behind Lord Elgin, who, it turns out, is the head of the Church of Scotland (news to us!). An Earl of something or other carried Robert the Bruce's broadsword down the aisle, held high in the air -- what a sight that was! There were several men in kilts and military regalia, and some Very Important Personages (unfamiliar to us, alas) wearing fur-lined robes and medals and all such as that. They settled into the reserved seats in the transept opposite from us.

And there we were on the front row with the BBC zooming in on us. I looked down at Justin to see his reaction. His eyes were drooping and he was struggling to stay awake, poor thing. Jetlag is powerful stuff.

Lord Elgin selected all the music for the service, choosing works that would span the centuries of Scotland's history. In addition to the Scottish National Fiddle Orchestra, he had also arranged for noted pipers, trumpeters and harpists to take part. The music was grand! It positively burst off those medieval stone walls.

The bishop explained that St. John's was the obvious venue for this special commemorative service in honor of King Robert's coronation because it was he who ordered its restoration in 1328, when it had fallen into disrepair.


This is the pulpit from which John Knox preached that historic sermon. The choir area beyond it dates from 15th century. To the left is a bust of Robert the Bruce, brought in for this service. Robert's broadsword was brought forward and mounted on the pedestal below the bust -- just a few feet from where we sat. We struggled to keep our jaws closed. 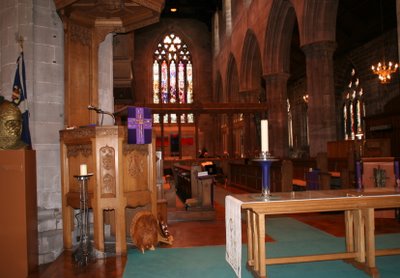 This immense vaulted wooden ceiling is a masterpiece of craftsmanship. I asked one of the ushers when it was built and she said something about it being "newer than some parts -- 16th century, perhaps." Newer. Right. Before it was installed, there were balconies there for members of the nobility and the royals. 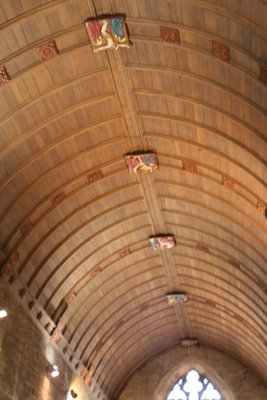 St. Andrew & St. Columba adorn this towering window - just one example of the stained glass in the sanctuary. 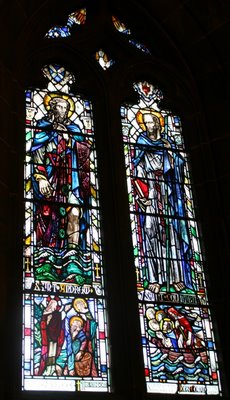 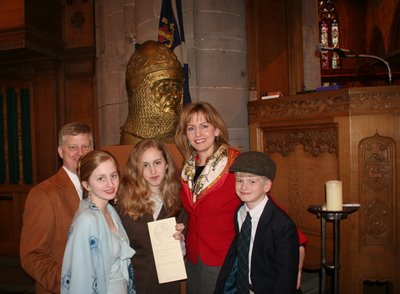 ... and then back onto The Bus, where we scratched a few hurried and rather startled noted in our journals on the way to the festivities at Scone Palace... 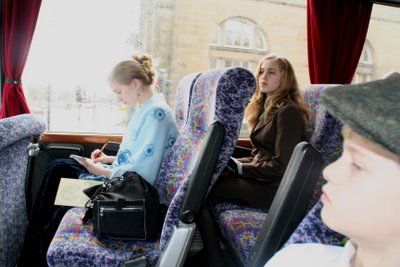 And their page on the history of the building

I'm as awestruck as a body could possibly be just from reading your narrative. And the pictures! Oh my. As wonderful as it is to see them I'm sure you're right---they can't possibly do it all justice.

QS, in the picture of the fam in front of the bust, your eyes look misty...in that way that eyes cloud over and get moist --- well, misty --- without acutally having tears. It comes from being overwhelmed in a good way. Like my eyes the night of the ceilidh in Memphis when my girls were on stage singing and you were beside me.

How exciting. Your story makes me want to study my Scottish heritage!

is it possible for you to also float my boat? because I think you're doing it! Loving the stories!