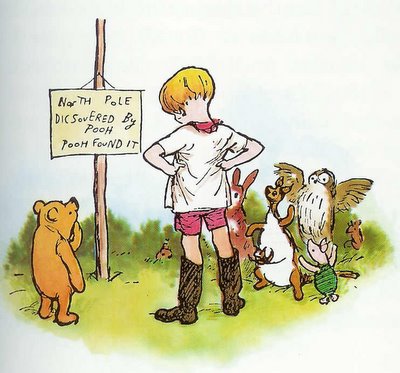 Today was the birthday of A.A. Milne, the creator of The Hundred Acre Wood, Winnie the Pooh, Piglet, Owl, Rabbit, Eeyore, Kanga, Roo, Christopher Robin... and Henry Pootel (we just like to say that name, so much so that it's become one of a dozen nicknames for our white cat).

Many are familiar with Milne's classic Pooh stories, but we Beehive people are equally enamored with his poetry. Every English speaking child on a perfect planet would have a copy of Milne's poetry and would know it so well as to have the joyous joy of being able to quote it at his whim.

In honor of the day and the man, "I shall tell you a bit of poetry" -- a happy bit that gets quoted quite often here at our house-- a line here and a line there, as appropriate for the moment, and always with an exaggerated English accent and an abundance of daughterish affection...

Tattoo was the mother of Pinkle Purr
A little black nothing of feet and fur;
And by-and-by, when his eyes came through,
He saw his mother, the big Tattoo.
And all that he learned he learned from her.
"I'll ask my mother," says Pinkle Purr.

Tattoo was the mother of Pinkle Purr,
A ridiculous kitten with silky fur.
And little black Pinkie grew and grew
Till he got as big as the big Tattoo.
And all that he did he did with her.
"Two friends together," says Pinkle Purr.

Tattoo was the mother of Pinkle Purr,
An adventurous cat in a coat of fur.
And whenever he thought of a thing to do,
He didn't bother much about Tattoo,
For he knows its nothing to do with her,
So "See you later," says Pinkle Purr.

Tattoo is the mother of Pinkle Purr,
An enormous leopard with coal-black fur.
A little brown kitten that's nearly new
Is now playing games with its big Tattoo...
And Pink looks lazily down at her:
"Dear little Tat," says Pinkle Purr.

A.A. Milne
from And Now We Are Six

And do hop over to The Common Room to read their delightful post today on Milne.
by Lynn Bruce